Saudi Arabia Goes the way of the Garamantes. Google Earth Confirms the Collapse of the Water Supply

In 2008, I noted the decline in Saudi Arabian water production and I published an article in "The Oil Drum" titled "Peak Water in Saudi Arabia." Using a simple version of the Hubbert model of resource depletion, I noted how the supply of "fossil water" had peaked in 1990 and had been declining ever since. This is the typical behavior of "fossil" resources: they tend to peak and then decline. It had already happened to the ancient Garamantes, inhabitants of central Sahara, who had developed sophisticated technologies of water extraction during the 1st millennium BC. That had allowed them to prosper for about one thousand years, but then depletion had its revenge and they vanished among the sand dunes. Something similar (but probably much faster) is going to happen in the Arabian peninsula.

The old Hubbert model was developed to describe the cycle of extraction of crude oil. It may be oversimplified if you want to use it for detailed predictions. But, as a quick tool for understanding the situation of the production of a non renewable resource, it tells you a lot of what you need to know. That first stab of mine on water production in Saudi Arabia turned out to be correct.

It is impressive how, today, you can use Google Earth to look at the situation "from above." You can see the collapse of the agricultural fields as depletion progresses. Here are the images of an irrigated area for a region East of Al Jubail, in Saudi Arabia,  26°48'29.60"N and  49° 8'47.58"E.

Let's start with an image of the desert in 1984. There is absolutely nothing there: 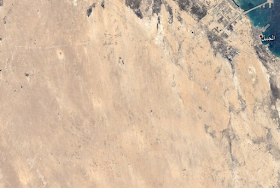 One year later, 1985. Someone has started extracting water and irrigating the land. There are two active fields there. 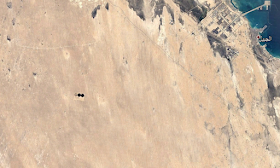 Below, you see an enlargement of the 1985 situation. Someone has built a road and you can see six irrigated areas, of which two are active. Each circle is almost exactly 1 km diameter. It is called "center pivot irrigation" -- there is a long arm that turns around the central pivot and irrigates the area. 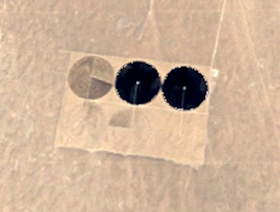 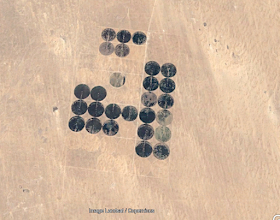 And now the area in 2002. There are now 46 active or partially active fields. Note the dark spots among the circular green areas. It is not clear what they are, could they be small ponds of brine? The water they are using probably has a high salinity and they have to dispose of it, somehow. 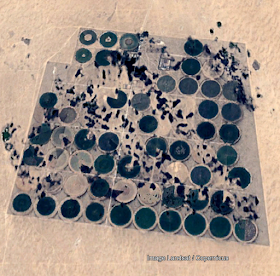 Below, the situation in 2015. The cultivated area is clearly declining. There are now only 17 active fields. 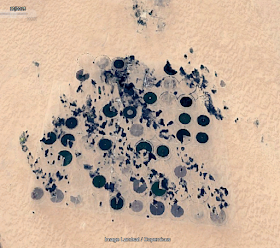 And, finally, the situation in 2020. It is gone. No green fields anymore. They simply ran out of water. 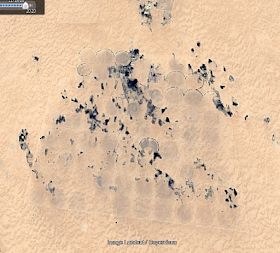 That doesn't mean that agriculture in Saudi Arabia is completely over. Scanning the desert using Google Earth, you can still find irrigated areas. Here is a place called Qariat al Olaya 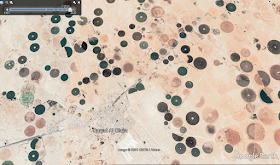 There are several irrigated circles, but note the number of "ghost" fields, not irrigated anymore. It may be a seasonal effect, but it may well indicate big problems with water supply.

Finally, some data about wheat production in Saudi Arabia, the most recent I could find (from "actualitix") 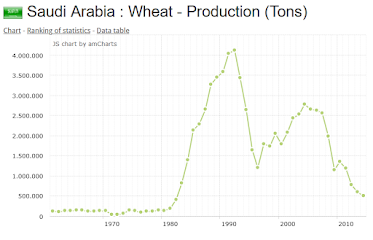 As you see, they had two peaks: the first one is the one I had already noted in my article on the "Oil Drum" of 2009. The second one was ca. 2005. As it often happens, when a resource starts declining, people tend to apply more capital to keep things going. It happens also with crude oil, the case of "shale oil" is a classic example. In Saudi Arabia, they succeeded in creating a second peak. But now, it seems to be the final decline.

Just like the ancient Garamantes, the Saudi Arabians were able to overcome the aridity of their land by using fossil water. But when they ran out of it, it was time over for them. The Saudis still have crude oil and can import food despite not being able anymore to produce it. But oil is a fossil resource, subjected to depletion just like fossil water. And the destiny that befell the Garamantes is going to befall all those who depend on fossil resources.